Today will be an “On this day” version of Chewsday, with our facts coming specifically from the many July 22nds gone before us.

On this date in the year 1298, the most infamous battle for Scottish independence took place. Having won a decisive victory at the Battle of Stirling, Wallace and his men had caused enough of a disturbance to sway King Edward I away from his campaigns in Europe and back to England. The king assembled a force of about 15,000 (2,500 of which were cavalry), which at the time would have been considered colossal. Wallace chose to allow this army to advance into Scotland, adopting tactics to lower their morale and waste their supplies. When they turned for home, the Scottish would harass them all along the route.

Today’s our fact centers around Scotland’s tactical formation; this was to use four schiltrons. A schiltron was a group of two thousand or so spearman, each armed with a pike up to fourteen feet in length. Between the gaps then were placed archers, so that overall the formation gave formidable defense against the then standard cavalry attack that was seen in medieval warfare. In fact, for the first portion of the battle, the Schiltron actually held firm and won some losses against the English. Sadly for Wallace though, Welshmen equipped with longbows brought an end to his tight-knitted units and to his rebellion. In the movie Braveheart, the use of schiltrons is best scene paradoxically at the Battle of Stirling scene.

July 22nd was also the date that the world’s most famed bank robber was shot dead. John Dillinger was head of the Dillinger gang, who were a successful group of bank robbers that at times featured names like Baby faced Nelson. On Sunday, July 22, 1934, at 5 p.m., Anna Sage, a woman who was aware of Dillinger’s true identity and working in a brothel, told FBI agents that she and Dillinger were planning to go to the movies, and were planning to either go to the Biograph or to the Marboro theater. Purvis, a detective on the case and member of the ever-growing ‘Dillinger squad’, decided to stake out the Biograph himself. Two other agents were posted at the Marboro. Purvis was standing just a few feet away from the theater entrance when the movie let out. As Dillinger passed, he looked Purvis directly in the eyes, but made no indication of recognition of suspicion. Following the pre-arranged signal, Purvis lit a cigar. As Dillinger and the two women walked down the street, Purvis quickly pulled out his gun, and yelled, “Stick’em up, Johnnie, we have you surrounded!” Dillinger began to run, reaching into his pants pocket to draw a gun. He entered an alley just as a volley of gunfire greeted him. Four bullets hit Dillinger’s body, three from the rear and one from the front. Two bullets grazed his face just next to his left eye. A third, the fatal shot, entered the base of his neck and traveled upward, hitting the second vertebra before exiting below his right eye. Dillinger died instantly and a crowd gathered around him. It had taken the newly formed FBI years to take out ‘Public enemy number no.1″, but on July 22nd, they got ’em. 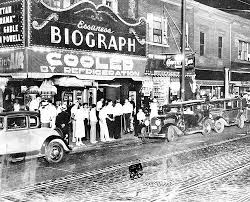