From hell, a graphic novel authored by Alan Moore and designed by Eddie Campbell, details the identity, motives and actions of the infamous Jack The Ripper killer of the late Victorian era. At first glance, the rather hefty book (which I later learned was published in separate volumes comic-esque style) didn’t grab my attention, but Waterstones had set aside their own section so all the same I gave it a flick through. The most obvious thing that strikes you is the fact that it is, indeed, a graphic novel (with pages cut up into illustrated tiles complete with speech bubbles etc). I sheepishly brought it to the counter, and wondered all the while was I just after buying a sicko’s version of a childhood Beano or Dandy comic. After finally closing the book on that awful Dean Koontz novel 77 Shadow street, the review *cough* rant *cough* of which you may find https://kyle8414.wordpress.com/2014/07/23/a-very-frightful-read-for-all-the-wrong-reasons/; I opened this on a bus and started my way through it.

A couple of pages in it was clear, very clear actually, that this was not some half-ass comic a wash-up writer had conjured up in a couple of weeks. Almost immediately you can feel the research bringing the pictures to life, and rather admirably you seem to forget after a while it’s all speech bubbles and short narration.

The premise of the novel is fascinating. Starting just before the Ripper murders that happened in autumn 1888, the book gives us a whole host of characters to play with. Some are the future detectives of our case. Others play the part of the victim. Even from the start, we are exposed to the man who will become the killer; a notion that at first I thought would take from the mystery but later on only seems to fuel the drama. Over a hundred years after the Whitechapel murders occurred, today we have over a hundred and fifty well recognised suspects ranging from Alice in Wonderland writer Lewis Carroll to Jill the Ripper-a woman the police might have investigated at the time. Alan Moore, however, chose to go with a suspect who first surfaced in the 1970s and has remained a favourite among conspiracy theorists ever since. Though the author admits himself evidence for the theory is limited, he nonetheless seems to convince you it is the only solution.

In chapter one, we are introduced to ‘Eddie Sickert’, who is actually the Prince of England at the time and only posing as an upper class gentlemen after the Queen and his family entrusted his education to one Walter Sickert (overall he is the grandson of Queen Victoria and second in line to the throne). He quickly becomes involved with an East End girl who becomes pregnant with his child. When the child is born, the royal family hear and quickly seize the mother to cover up the scandal. Mary Kelly, whose name is forever remembered as the last of the Ripper victims, was friend to the mother at the time and knew of the Prince’s identity. Now stuck for money, her and her other ‘working-girl’ friends attempt to blackmail the throne through Walter Sickert. When word of this reaches Victoria, she quickly orders her then trusted doctor Sir William Gull to take care of the problem, and so the killings begin.

While, as I have mentioned, only scraps of evidence link the royal family to the killings, Alan Moore manages to create a whole world around it, with various twists and turns that ensure even someone with a knowledge of the killings (which I actually could claim somewhat after visiting London a few times) is kept on their toes. His attention to detail is wonderful, as he focuses in on Victorian vocabulary and thoroughly creates the area of Whitechapel alongside artist Eddie Campbell. What struck me very early on was how academic the piece actually was, as surprisingly a large amount of imagery, themes and symbolism seem to crop up. Luckily, this does not drag from the story and only seems to be put in to satisfy the more thorough readers, like an adult returning to an episode of The Simpsons and relishing new jokes.

Each of the five murders play out very dramatically, with Moore managing to stick to the historical facts as best he could including witnesses, times of death and the movements of the victims. The obvious black and white of a comic strip here becomes haunting. Whereas most Ripper lore (if I can coin such a term), seems to focus on the killer, this is undoubtedly a story of the victims. Never before have I seen literature on the topic painstakingly show how one by one the next girl feared for her life as the fruit of their blackmail attempt turned sour.

While the whole plot revolves around a very edgy theory, it is rather comforting to see Alan Moore helps debunk a couple of his own mysteries while he moves through it. These include some of the supposed letters from the killer, which in modern culture remain such a point of fascination for crime enthusiasts and may have even been the catalyst behind some of the zodiac letters, who killed in the 20th century. Something that sticks out as a theme is how the murder of five prostitutes in such a gruesome manner does serve as a base for the horrors of the twentieth century, where we endured two World Wars and were at the mercy of horrific serial killers.

Later on in the piece it moves very much towards the story of Fred Abberline, who actually was the lead detective on the case. While many of the details for obvious reasons are fictional, it once again moves away from the limelight of the killer and shows a more human side to the murders we miss in Hollywood interpretations. The idea of police cover-ups also comes to the fore which adds another layer of complexity to a gripping tale. I would doubt I could find another comic strip out there that can manage to tell such a horrifying story yet at the same time conjure up questions about things such as the role of women, and the view of the poorer part of society. The East End was seen at the time as violent and unmanageable, with most of the employment listed as prostitution. In a time before finger prints or criminal profiling, the foggy streets of Whitechapel were like a murderer’s playground. It was a part of the job for the five victims to be trusting of men, and unfortunately this led them straight to their doom. 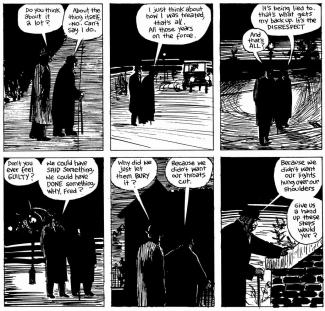 Hollywood films such as Saw or Hostel may have succeeded in numbing our minds to the effects of violence, but even so this was terror on a whole other scale. Somebody stalked the streets of the East End for three months, and hunted women there. He was never found. We will never know his name. All we have left of him is pictures of his destruction, and here or there a vague description from a passerby. Long dead, even in his own time he was a ghost.

I would definitely recommend From Hell to anybody with an interest in graphic novels, which I cannot even claim to have. For lovers of crime and horror, it would also be very suitable. Very explicit in its imagery but I suppose that’s part of the genre.A film adaptation starring Johnny Depp also exists, though I’ve read the two differ broadly.

Soon on Monday Mysteries, I’ll take a very detailed look at Jack the Ripper, starting when he did in late August. I promise you it will be word the read. Until then, it’s on to Patrick Rothfuss’s The Name of the Wind for me.